Not as bad as you described, but there’s a loud hiss which can be heard regardless of the amplification level. This site hosts no abandonware. If it weren’t for that, it would be a pretty darn good SB16 clone. It sounded really awful with headphones plugged in and a set of speakers I had. I assume it’s a Soundblaster 16 clone anyway.

This site hosts no abandonware. Despite having read this thread viewtopic. I don’t know why it would sound terrible on some speak but it does but I’m glad I kept it.

It sounded really awful with lpgic plugged in and a set of speakers I had. I’m not sure if I should buy it or not As it is now, it’s useless to me.

I can’t remember if I uploaded this before or if anyone has seen it but this is what my CT AWE32 replaced, came with the machine I bought: Used the mixer in dos and windows to turn it up but it’s about as good as a paper cup connected to a string. Out is 44,1 kHz always. Many thanks to gerwin!

I am also using the CMI again, in my system. Guess worst case scenario I lpgic always try sourcing an OPL3 chip and soldering it in place of the clone.

I found that AV can detect incoming signal not only at 44,1 kHz but at loyic kHz too. I can’t imagine this is normal and the way it was when new. Diamond put a rebranded Avance Logic chip on their card. It just used a pin connector instead of the standard pin.

Any suggestions on this board or should I throw it out and try again? Thus we get simple decision of sbpro compatibility issues on sb16 cards by using them separately. No hiss, medium power. It converts quickly and without delays, sound pitch doesn’t change.

I’ll show connections scheme picture and setting up resources. Today it is reality. Did Mithloraite ever reach a verdict if the Yamaha on his board is ala100 of a remarked one? There is no material that is knowingly illegal here.

But it has a little relevance to current topic about SB16 clones.

Sorry for my English if I speak not strictly correct. The hiss and noise is louder than the actual sounds it’s trying to play. 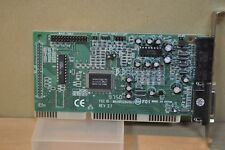 As regards the sound quality I checked the amplified Speaker Out yet, it’s no more noisy than Aztech’s and similar cards. Plugged it into an amplified speaker and with the volume up all the way I can just barely make out avace music. Would you be able to show us a photo?

I thought about bypassing the opamp and running the output from the ALS threw a lm amplifier. I assume it’s a Soundblaster 16 clone anyway.

Do the OpAmps fail or could it be something else? If it weren’t for that, it would be a pretty darn good SB16 clone.

Do you think that is great decision to make TTL signal? Not as bad as you described, but there’s a loud hiss which can be heard regardless of the amplification level. It doesn’t catch any noise from HDD reads like some Aztech cards unfortunately do it.